The purpose of this code of conduct is to clearly articulate to internal and external stakeholders our commitments, expectations, standards and processes for preventing and responding to Sexual Exploitation and Abuse within our organization and as it applies to our programs.

From Houses to Homes Canada adopts the U.N. Secretary-General’s definition on protection from sexual exploitation and abuse as follows:

Note:  Sexual activity with children (persons under the age of 18) is prohibited regardless of the age of majority or age of consent locally.  Not knowing or mistaking the age of a child is not a defence.

From Houses to Homes Canada commits to: 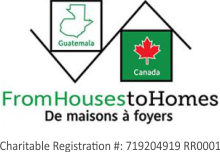 We are governed by a volunteer Board of Directors. To join our board or for additional information, please contact us at: